August 19, 14-Day Itinerary
​Events listed are based upon availability and upon local variations of closing times. 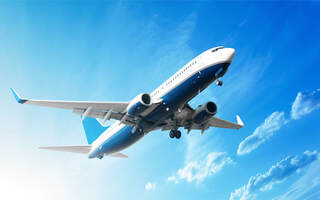 DAY 1  - Friday, August 19, 2022
Depart USA to fly to Moscow
Relax and enjoy the ride with melatonin to keep your internal clock on schedule. ​Get as much sleep on the plane as you can so you stay awake when you get to Moscow. You can get an earlier flight, but you'll need to arrange for your transfers.​ 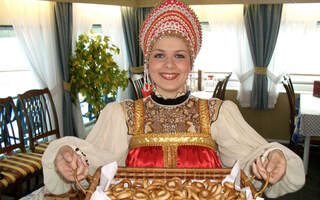 DAY 2  - Saturday, Aug. 20 ​(Greeting!, Transfers to ship, Orientation, 2 hr. city tour, Entertainment, Dinner)
Arrival in Moscow
​         You are be greeted by our friendly English-speaking Russian staff at the airport (provided you've booked your air through our Expedia team). They help you with your luggage and onto the bus that takes you to the Richnoi Vauxhal -- river port -- where you board our deluxe 5-star river cruiser.  Your personal guide, translator and counselor gives you a full orientation of the ship, the schedule and your room -- but don't go to sleep yet!
​Your evening bus tour is to Red Square, St. Basil's, the Kremlin, Moscow University Heights, the Bolshoi Theater, and more!  Be amazed by the sights of this capitol city and remember, 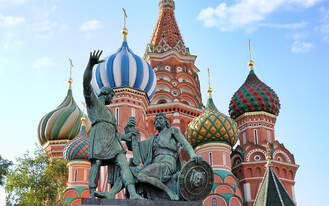 DAY 3 - Sunday, Aug. 21  ​(7+ hr. Moscow tour, Entertainment, Breakfast and Dinner)
Moscow
​Last night you got to see Moscow and the sites by night, but today we return for a walking tour of Kremlin, Red Square, Lenin's Tomb, Tretyakov Art Gallery, Transfiguration Cathedral. If you happened upon Moscow before 2000, you won't recognize the skyscrapers and dynamic sky line. After dinner on the ship, we treat you to the fabulous Moscow Circus! 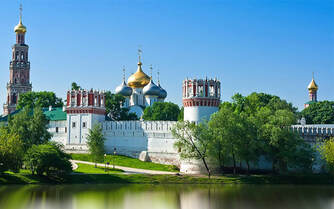 Day 4 - Monday, Aug. 22  (7 hr. Moscow tours, Entertainment, Breakfast and Dinner)
Moscow and Departure on the Moscow River
​Another great tour of Moscow with the monastery of St. Cyril on the White Lake, Swan Lake and Novodevichy Convent . The adjoining cemetery is the last resting place for the Who's Who of Russia. Given the Russian adoration for statues and immense monuments, it is a fascinating place. Hunting for the famous graves is almost as much fun as actually finding them. We then return to your ship for the traditional departure ceremony.
​On board you'll meet Russian guests, most of whom speak some English! Your counselor can assist as well on the decks as we cruise the Moscow River to the first of 24 locks you'll experience.  Or enjoy getting to know them over dinner. 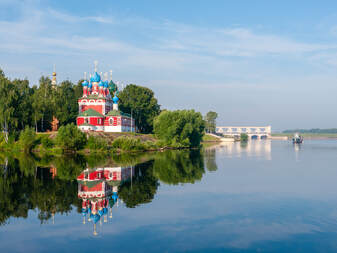 Day 5 - Tuesday, Aug. 23  ​(2 hr. Uglich tour, 3+hr. Culture program, Entertainment, Breakfast, Lunch, Dinner)
Town of Uglich for start of Golden Ring
As we cruise the Volga River, keep an eye out for the sunken white church. After breakfast you'll have your choice of:          ​Open deck cultural show as we depart, and then head for dinner. Sit where you like, with whomever you like. Then, great entertainment.

Day 6 - Wednesday, Aug. 24 ​(3 hr. Kostroma/Ipatiev tour, 3+hr. Ship Culture program, Entertainment, Breakfast, Lunch, Dinner)
Golden Ring city of Kostroma
Our ship docks at the Kostroma port where only river yachts such as ours can dock, next to the park and banks of one of Russia’s most historic towns. Founded between 1152-1213, but may be 400 AD! Sacked by the Mongols in 1238. looted by Novgorod pirates In 1375, it experienced spectacular growth in 1500s with English and Dutch merchants. In 1773, Catherine the Great dropped her fan on the city map, and told the architects to follow her design. One of the best preserved examples of the 18th century town planning, Kostroma retains some elegant structures in a "provincial neoclassical" style.
Today, Kostroma holds a romantic view by Russians as the birthplace of the Romanov Dynasty.  Boris Godunov rebuilt the amazing 14th century Ipatiev monastery in the 1600’s. Future tsar, Mikhail Romanov, lived at the monastery until he received the Russian crown in 1612. Thereafter the Romanovs regarded Kostroma as their special monastery.
Here as well, when Gorbachev declared “perestroika” or the restructuring of the Soviet economy to a free market path, new shops and businesses quickly sprang up in Kostroma. 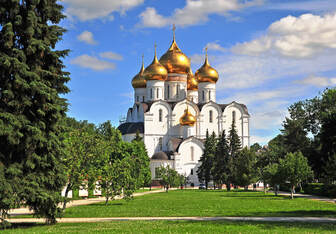 Day 7 - Thursday, Aug. 25  ​(2 hr. Yaroslavl tour, 3+hr. Ship Culture program, Entertainment, Breakfast, Lunch, Dinner)
Golden Ring city of Yaroslavl
Ancient Tsarist trading center   Part of the Golden Ring group of ancient towns, Yaroslavl was founded in 1010 AD by Prince Yaroslav the Wise.
Legend has it the prince stopped at the pagan village, Bear’s Corner, to put an end to pirates attacking Rus ships and adopt Christianity. The locals set a ferocious she-bear on him. The fearless prince killed the beast with a poleaxe. He built a fortress and the city followed. So much to see in this strongpoint of princely power, trade center and outpost for the spread of Christianity in the Russian Northeast.
The downtown has a charming shopping area where you can sample the real-life variety available to today's Russians.  Taste their bakery treats and purchase a loaf of bread - a real "slice-of-life" in the city of Yaroslavl. 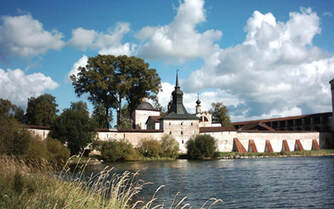 Day 8  - Friday, Aug. 26 ​(2 hr. Goritsy tours, 3+hr. Ship Culture program, Entertainment, Breakfast, Lunch, Dinner)
Goritsy of Golden Ring Fame
​After passing through the Rybinsk Reservoir to the Sheksna River, we dock at the picturesque village of Goritsy's and the Kirillo-Belozersky monastery, built in 1397 by St. Kirill and frequented by many tsars, Beautiful forests, friendly people and a unique ancient monastery all in one. 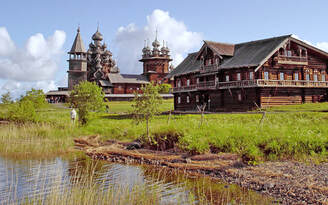 Day 9 - Saturday, Aug. 27  ​(2 hr. Kizhi tour, 3+hr. Ship Culture program, Entertainment, Breakfast, Lunch, Dinner)
​Sacred Island of Kizhi
Perceived by people of Karelia as "the true eighth wonder of the world", Kizhi Pogost is indeed a unique artistic achievement. To approach the wooden Church of Transfiguration from the water with its multitude of shingled onion domes and unmistakable silhouette is a transformative experience. Your guide ashore gives you an up-close view of this incredible church, built without nails and the other 89 traditional wooden meeting houses, homes and other structures. An idyllic retreat from the world. 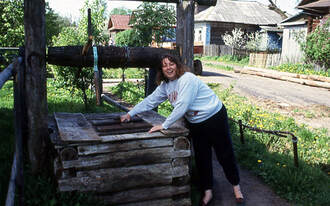 Day 10 - Sunday, Aug. 28  ​(BBQ, free time, 3+hr. Ship Culture program, Entertainment, Breakfast, Lunch, Dinner)
Hamlet of Mandrogi
Prior to World War II Mandrogi was a quintessential Karellian mill town established during the reign of Peter the Great, a fishing settlement hardly touched by time. The war left it a burnt ruin, but after the Soviet Union fell, a group of Russian investors bought the land and invited the best of the region’s woodworkers to use their creativity and traditional skills to restore the town to its former glory. Between 1996 and 1999 the traditional buildings were restored. After lunch we finish sailing the Svir River and enter the twin lake, Lake Ladoga. On we go to St. Petersburg where we'll dock early in the morning.
​ 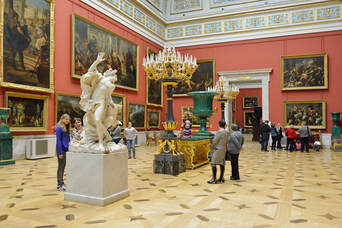 Day 11  - Monday, Aug. 29  ​(7+ hr. St. Petersburg tours, Breakfast only)
St. Petersburg City Tour
​Sadly, say goodbye to your wonderful counselor and Russian friends and in doing so you'll definitely know why we are named "The Heart of Russia" cruise.
​         We transfer from the port located far from the city center to  the enormous St. Petersburg Hotel (or equivalent) located just across the Neva River from the Hermitage/Winter Palace. Before check-in we tour one of the most beautiful cities in the world highlighted by the intricate canals of the "Venice of the North." Note how each canal has its own style of wrought iron fences and railings.
We stop at the marvelous Church of the Savior on the Spilled Blood Cathedral built to memorialize the death on that spot of Tsar Alexander II who freed the Russian slaves or serfs. We also see the mighty Peter and Paul Fortress and the AURORA, the ship that fired the cannon that signaled the start of the Lenin Revolution and storming of the Winter Palace.
In the afternoon we tour magnificent St. Isaac's Cathedral, often noted as the MOST ornate cathedral in the work. See wonderful architecture and opulent design. Amber walls, lapis lazuli and jade columns. Hike to the exterior of the dome.
Then Yusupov's Palace near St. Isaac's with its Turkish bath and scaled replica of the Mariinsky Theater where the prince staged operas. In the basement you'll see Rasputin's room and hear of his exploits.
Tonight you have free time to take water taxis for more views of the city, or head to a ballet or folkloric, or just lounge in one of the last Soviet-style grand hotels. Free time to explore St. Petersburg cuisines. 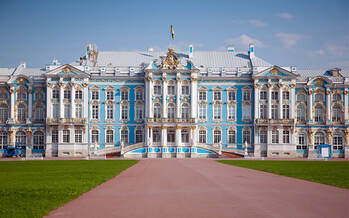 Day 12 - Tuesday, Aug. 30  (7+ hr. St. Petersburg tours, Breakfast, Lunch, Dinner)
St. Petersburg Countryside Palaces
We head into the lush green countryside to experience Tsarina Catherine palaces. Opulent opulence to the nth degree. Then on to Peterhof and the amazing gardens of Peter the Great and his palace on the Gulf of Finland.
​​ 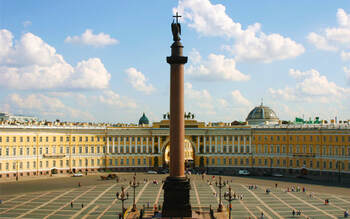 Day 13  Wednesday, Aug. 31  (3+ hr. St. Petersburg tours, Breakfast)
​The Hermitage and Winter Palace and some Free time
​      Relish the Winter Palace's Hermitage with one of the greatest collections of art in the world. Our tour concludes at noon to give you the chance to see nearby sights including more time at the Hermitage, or the Russian Museum, or back to St. Isaacs or the Church of the Spilled Blood or... so many things so nearby.
​        Afternoon and evening are great free time to explore St. Petersburg. You'll love the free time. Or Boris can arrange, at a fee, tours for this afternoon and evening. However...Note: if you choose, you can have dinner in a Russian home this last evening. No extra charge.
​ 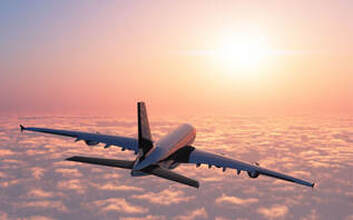 Day 14  Thursday, September 1  ​(Airport transfers and breakfast)
​Departure
​     Too soon our voyage is over. St. Petersburg demands you return or at least speak to our partner, Boris Leostrin. Before you book your air with our agents, he'll help you extend your cruise for a few more days to get even more wonders. So much to see and do in the "Venice of the North."
​Fly to USA.  ​